SETTLERS is a project that explores the context of beekeeping in Iceland through interviews with beekeepers and documentation of apiaries on Iceland. Beekeeping is for various reasons not yet established in Iceland. However an increasing number of people are making efforts to import and keep honey bees. 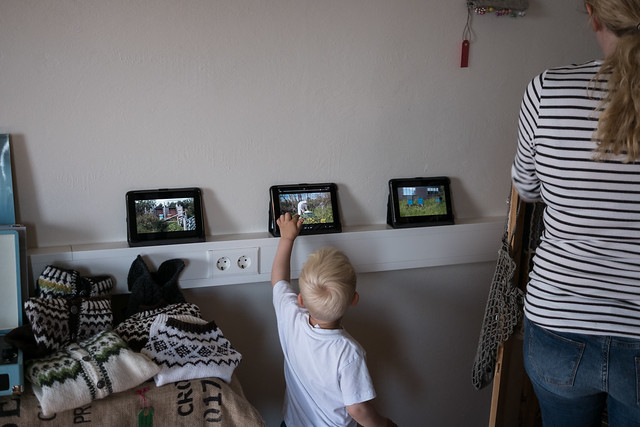 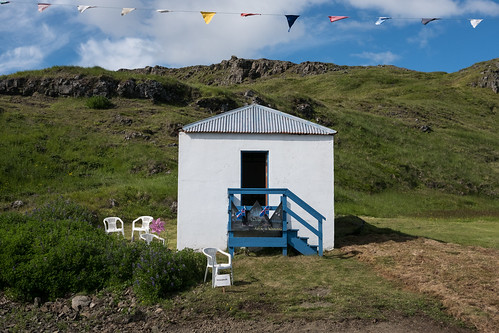 [Exhibition in The Old Library Art and Culture Project]


During the village festival in Drangsnes, Iceland in July 2017 a selection of videos and interviews from visits to beekeepers in Iceland were shown shown in the old village library, which is now a space for art and culture activities and for selling local produce and craft.

The videos were displayed on tablets borrowed from the middle and upper school in Drangsnes. All of the seven small tablets the school has were used, which is about one for every student in the school.


The videos, like the ones above and below, showed apiaries in Iceland with comments from beekeepers on the particular circumstances of beekeeping on Iceland. More videos can be found here.


ABOUT BEEKEEPING ON ICELAND

In many parts of Iceland it seems like it is almost impossible to make honey bees thrive for longer periods. The weather is just too harsh and there is not enough flowering plants. Feeding the bees with more sugar could make up for the lack of flowers, but if all the bees eat is imported sugar then the question is if it wouldn't be better to just import honey instead. In other parts of Iceland, where the climate is milder, beekeeping is working out better. There are beekeepers who get up to 60kg of honey from a hive, which is a good harvest.

People on Iceland have been attempting beekeeping with more or less success from at least the 1940's but more organised beekeeping didn't start until the late 1990's. Today the Icelandic Bee Association keeps track of 100-150 hives on Iceland. There is even a beekeeper who has started to breed queens. However, Icelandic beekeepers are still dependant on importing bees. The bees are imported from Åland, an island in the Baltic sea, between Sweden and Finland. Åland has been lucky and, because of its relative isolation, not been subjected to varroa and other bee diseases. The idea is that by bringing the bees from Åland these diseases can be avoided on Iceland too. So far it has worked out well.

If bumble bees, solitary bees and other wild pollinators are subjected to competition from honey bees is not particularly researched. However, it has been shown that there can be competition where there is a limited amount of flowering plants [1]. If beekeeping becomes more popular then perhaps there is a risk that honey bees outcompete some of the relatively few native pollinators on Iceland [2]. On the other hand, given the relatively few locations on Iceland that really are suitable for beekeeping, it is not likely that beekeeping will become ubiquitous anytime soon. More beekeeping would likely go together with changes in the flora and climate. In any case honey bees are not the biggest threat to wild pollinators on Iceland. A number of Iceland's pollinators, including the native heath bumblebee, are already at risk of severe population declines if the invasive lupines that were introduced on Iceland in the 1940's to combat soil erosions continues to replace native flowering plants [3]. This summer (2017) a new shipment with around seventy bee colonies arrived by airplane to Iceland from Åland. If these bees survive and reproduce it could mean that beekeeping is established in Iceland. If they don't it will be one of several attempts to import bees that have not succeeded in creating a sustainable honeybee population in Iceland.

Thanks to Marta Guðrún Jóhannesdóttir for arranging the exhibition in The Old Library Arts and Culture Project during the village festival in Drangsnes, and for opening up the school in Drangsnes as a residency during the students summer leave. To Bjartni for leaving the bottle of home made dandelion sherry open during the exhibition. To the beekeepers who have let me interview them and film their apiaries, and to Nordic Culture Fund, Nordic Culture Point and the Swedish-Icelandic Co-operation Fund for supporting travels to work with the project on Iceland.